In this series of game design blogs I’m going to go through each of the 36 classes in the table top roleplaying game Shadow of Mogg to explain some of the creative decisions I made when designing it. In the last blog we looked at The Intensive Care Nurse.

In this blog we're looking at the Mogg Rustler.

The Mogg Rustler drew inspiration from the ‘Gremlin Catcher’ class in Troika. It was the first class I happened to roll up and play in my good friend Sean’s ‘Keep on the Borderlands’ Troika one shot. I played the Gremlin Catcher as effectively a cockney nutjob with jars full of Gremlins who ended up eating by zombies, which was about on point.

I thought a similar class would be amusing in Shadow of Mogg. ‘Moggs’ within the game are effectively fascists who have turned into morlocks because I’m not subtle and I don't care. Hence the ‘Mogg Rustler’ is a loosely implied ‘anti-fa’ member who ‘rustles’ Moggs in the tunnels.  This lore isn't ever explicitely stated in the book but the idea is you read it and come to your own conclusions, even my interpretation isn't really true. Trust nobody. They come with a ‘Leashed Mogg’ within their ‘Stuff’. This would technically fit better in the 'Mate' section as the Mogg is more a 'follower' than an item. However I wanted to emphasise the dehumanisation of the Mogg by effectively putting it in the classes gear. The leashed Mogg does  provide a pretty large bonus of ‘3’ to make up for this. This allows you to roll 3 additional d6 when using the Mogg in actions. As the Mogg is stuff this also implies they need to be 'repaired' rather than 'healed' by using Gubbins, the games currency and repair resource, instead of Meds the healing resource.

They carry a milkshake to douse the flames of fascism wherever they find it as well as a pair of handcuffs in order to rustle another Mogg should the need arise.

The traffic cone they carry came from a video I watched on how Hong Kong protestors would use traffic cones to suppress smoke bombs from the police and thought it would make sense to give to our budding anarchist. The Mogg Rustlers ‘special’ ability is an interaction with the ‘reaction roll’ where the Mogg Rustler has a penalty when meeting ‘Bourgeoise’ and ‘Aristocrats’ and is immediately attacked by Moggs. This is a nod to the idea that fascism is a violent reaction from the bourgeoise losing their power to the capitalist classes which makes them have more affinity in this case with the Moggs than they do with the anti-moggs. Within Shadow of Mogg when the party meet another party in the tunnels a reaction roll is made to determine. This is a d6 dice pool roll based off of the combined current Bants total. So if the Party has a combined bants of 5 they roll 5d6. If the highest result is a 6 the response is friendly, if a 5 they’re wary and guarded, if a 2-4 they are hostile and on a 1 they attack.

This specifically uses the parties ‘current’ bants score. In Mogg stats degrade as you play, which means a party who is low on ‘banter’, i.e they’ve exhausted themselves within a lot of different social situations and reduced their stat, will be more likely to cause hostile reactions representing their general ‘grumpiness’ or what not. Whilst a fresh faced party are likely to find people more friendly towards them.

Reaction rolls are not  a new mechanic and go back to original D&D where they were a 2d6 roll on a sliding scale. They determined how monsters would react to the party whether friendly or hostile and they work much the same way in Mogg but using the games d6 pool system instead. 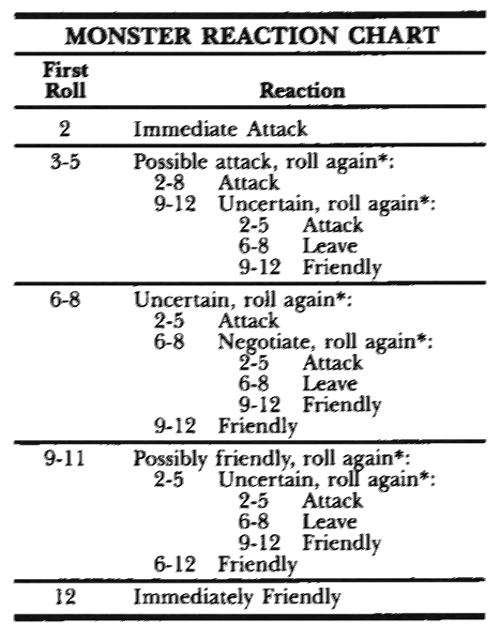 As a rule of thumb in design it’s good to integrate your mechanics with the classes, often mechanics like reaction rolls are ignored but they really help in Mogg to emphasise emergent play within the game and make Bants a really important stat. If you add important mechanics to the classes then it will encourage the group to use them as that player will want to use their special ability, this is also why the Barrister interacts with the Party Manifesto and The Whigg interacts with party voting. The Mogg Rustler has a pretty simple interaction and not exactly a positive one but does remind the group reaction rolls exist.

As for gear the Mogg Rustler sports some relatively solid Makeshift Armour and a lead pipe for bashing, orienting them towards aggressive solutions. Their question relates them to one of the other party members in terms of them going to the same school but. This personalises the character a bit and lets the group explore concepts in the beforetime such as ‘schools’ but also serves to create some group tension. They come with a Scran as most classes do so the group doesn't starve to death straight away as well as Molly as if anyone has a cheeky go the Rustler certainly does. The Molly could be also be useful as the Rustler no doubt will cause some psychological tension within the group.

For the art I asked Aled Lawlor of Anima Press to emphasise the leashed Mogg who was more goblinoid monstrosity than man, as well as to give the rustler an appropriately dashing guy fawkes mask. I really love how this one turned out, this is the only place in the book a Mogg is directly represented in art and it's a wonderful example of their twisted nature. One nice play on the word 'Mogg' is that they're a type of goblin in Magic the Gathering, most of the ideas in the game are just stupid shit I found funny. Honestly anyone can do this design thing.

What do you think of the Mogg Rustler? Too far or not far enough?

In the next blog we'll be looking at the Tinker